In Clogheen, Co. Tipperary at the invite of Father Butler, PP to commemorate Father Nicholas Sheehy who was executed 250 years ago 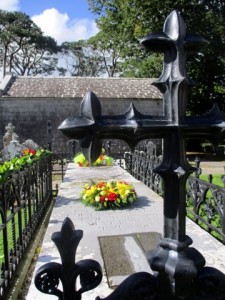 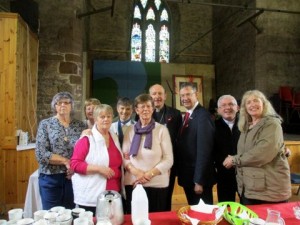 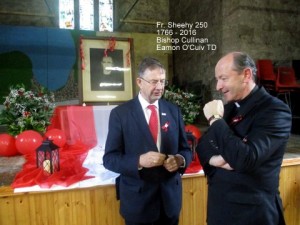 This is a reminder for all third level students commencing studies in 2016-2017 that SUSI are still accepting grant applications. Students can apply online at www.susi.ie. I would advise students to apply as soon as possible. If you require any assistance or further information, please do not hesitate to contact my office at (091)562846. I wish you continued success in your future studies.

I will be hosting a public meeting regarding refuse charges and the collection process in the Station House Hotel, Clifden on Monday the 25th July 2016 at 8:30pm.
A representative from Barna will be in attendance. This is an excellent opportunity for the community to outline their concerns and to get further clarity on this issue.
Other public representatives are welcome to attend this meeting.
Tá cruinniú eagraithe agam maidir leis na táillí bruscair agus an próiseas bailliúcháin in Óstán Teach an Stáisiún ar an gClochán, Dé Luain, 25ú Iúil 2016 ag 8:30i.n.
Beidh ionadaí ó Barna Waste i láthair ag an gcruinniú ar an oíche. Is deis iontach atá anseo don phobal tuilleadh eolais agus ceisteanna a chur maidir leis an gcóras dramhaíola.
Tugtar cuireadh d’ionadaithe poiblí eile a bheith i láthair ar an oíche.

I have tried once again yesterday to get the Dáil to reject the proposal of the Minister for Transport, Tourism and Sport, to down-grade Galway Port from a Nati…onal Port, when the Report Stage of the Harbours Bill 2015 was discussed in the Dáil on yesterday.

It is proposed in this Bill to reduce the status of Galway Port from a National Port to a Port of regional significance, which will not be in the in the interest of the development of the Port.

However I put down an amendment to the bill to delete this section but it was defeated- The Minister has been adamant that he is going to proceed with this section of the Bill. However the Minister in response to Deputy John O’Mahony did state that he would not commence this section for 18 months. I welcome this very much as it will give the people of Galway a chance to voice their opinion on this proposal in the forthcoming election and to reject outright the denial of national port status to Galway.

Galway Port Company has major plans for the development of the port, but it would be absolutely vital for the success of these plans, that the status of the Port would be retained as a National Port.

“If the Minister’s proposals goes through and if the status of Galway Port is changed, there will be no National Port from south of Limerick around the very long western coast to Derry. This would leave all of the national ports in the country between Dublin and Foynes, with the west coast left bereft of a national port. Once again Connaught is being treated as the Cinderella province.

The plan for the port was to relocate it outwards into the harbour, freeing up the inner-harbour area for redevelopment, for commercial, residential, recreation and cultural use, which is centrepiece of the inner-harbour being used for marine leisure.

Fianna Fáil General Election candidates in Galway West John Connolly, Cllr. Mary Hoade and Éamon Ó Cuív TD will host a public meeting on crime prevention next Monday 30th November in the Galway Bay Hotel. The party’s Community Affairs Spokesperson Bobby Aylward will chair the meeting and keynote speakers include Sergeant Pat Flanagan from An Garda Síochána Crime Prevention Unit and Bernard Kearney from Múintir na Tíre. “Every community across Co. Galway has felt the effects of this crime wave that is sweeping across the country. Garda numbers have decreased significantly over the past five years under this Government, and despite commitments on Garda recruitment, it will take years before we see more boots on the ground. The fact of the matter is that the Gardai need more resources now, not in a few years’ time. Not a week goes by without media reports about the latest burglary or robbery and people are becoming increasingly fearful in their own homes, especially those who are elderly or living on their own”, said Mr. Connolly. Cllr. Hoade added, “People are really worried about their security, in both rural and urban communities. There is real concern about burglaries and many feel a greater sense of isolation than they did a number of years ago. Since 2013, ten Garda stations in Galway have closed leaving communities across the county more exposed and vulnerable. Garda numbers have also been slashed, from 601 in 2010 to 564 in February this year. Criminals are taking advantage of these depleted resources and we have had a number of high profile robberies, being carried out by organised gangs. Deputy Ó Cuív explained, “There needs to a radical rethink about how we tackle crime. Fianna Fáil has put forward a 7 point plan aimed at clamping down on this crime spree – it will be one of the issues up for discussion at the meeting. I’m delighted that we will be joined by Sergeant Pat Flanagan and Bernard Kearney who will be giving a unique insight into the problems being faced by communities in Galway as well as measures which can be taken to deter criminals. “Fianna Fáil is determined to make the fight against crime a top priority and we are anxious to hear from members of the public about their experiences. The party is holding a series of meetings across the country to listen to the concerns of people who are worried about crime. We want to see more initiatives to strengthen the Gardai while making it tougher for criminal gangs to target communities”. The meeting will take place in the Galway Bay Hotel on Monday 30th November at 8pm.